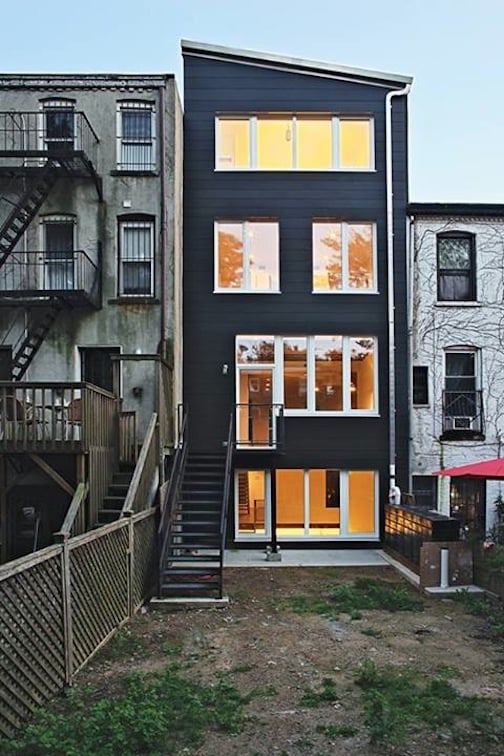 According to the Passive House Institute, the Passive House concept is "today's highest energy standard with the promise of slashing the heating energy consumption of buildings by an amazing 90%." This sustainably transformed Brookyln brownstone is NYC's first Passive Home, featuring Richlite Midnight Iron Rainscreen on the building's rear exterior.

CMU block can make it a chore when building certainl elements in New York City, but a rainscreen offers the ability to insulate the exterior of the concrete block and then cover that with an attractive and breathable FSC rainscreen facade.

Julie Torres Moskovitz of FABRICA718, the architecture firm that designed the project, has a great book out on Passive House design. Passive House is a misnomer since the standard applies to commercial buildings as well as multi-family. http://www.fabrica718.com/book

The standard is based around a specific energy number. We recently took an excellent primer course offered by the Passive House Academy that puts on classes often in New York City and around the country. Our instructor summed it up well when he compared Passive House as being deep and specific rather than broad and shallow when it comes to green building. The LEED standard being board and shallow since there are so many items of the punch list and ways to gains points: bike racks to FSC wood; water saving fixtures on down to site runoff planning. The Silver, Gold and Platinum ratings are earned by garnering more points and credits.

Passive House certification is quite different. It goes deep down the rabbit hole of energy savings. This is quite different philosophically than "net zero" or "green energy". The passive house standard looks to reduce the energy used to heat, cool, ventilate and light the house; no matter where that energy comes from. The standard mainly revolves around a singular number: 4,750 BTU/sqft. per year. An energy model accounting for all kinds of vagaries when it comes to insulation, materials, thermal bridges and airflow guides the designer. The model calculates if the structure will consume more than this amount of energy. Air sealing is the next important component.

For anyone interested in the topic we highly suggest Passive House Academy's one day primer course.

According to the Passive House Institute, the Passive House concept is "today's highest energy standard with the promise of slashing the heating energy consumption of buildings by an amazing 90%." This transformed Brookyln brownstone is NYC's first Passive Home, featuring Richlite Midnight Iron FSC Rainscreen on the building's rear exterior.