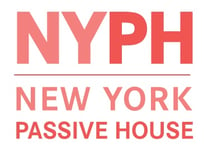 This year’s New York Passive House Conference and Expo was a great opportunity to meet architects, designers, builders and manufacturers dedicated to the Passive House movement and share information. There were many influential speakers that were all able to shed light on the ways we can implement Passive House as a tool to provide us with a more sustainable future. A roundtable discussion titled ‘Policy, Passive House and a Resilient New York Future’* shed light on some of the challenges and solutions ahead to enable New York to lower our energy consumption, which Mayor De Blasio has set to be reduced by 80% by 2050. For this to be possible, the way we build new buildings and retrofit existing buildings must change, as buildings currently account for 60% of the city’s total energy usage.

Some immediate issues addressed were code compliance issues, causing Passive Home architects to first apply for “Special Consideration” before beginning construction. It is also difficult to reach Passive Home Standards in High Rise buildings as the market is accustomed to an endless span of windows that are not compliant with Passive Home construction. Ultimately the largest obstacle, as outlined by Albert Appleton from the Cooper Union, is the lack of a central driver within the Passive House movement. Laurie Kerr from the Urban Green Council added the poignant, “28 buildings does not a movement make.” New York needs more than 28 passive buildings: New York needs all new construction and retrofits to comply with Passive House or similar energy saving standards. The Passive House goal of a total energy demand that is at or under 38 kBtu/ ft²/yr per building gives a 66% chance of not raising the Earth’s temperature by another 2?C, which is essential to human life.

It is clear that the need for Passive House construction goes beyond market concerns and paperwork. The clarity of the Passive House concept and energy consumption goals that can be easily tested and repeated are two of the movement’s greatest strengths and can be utilized. These factors make it possible for New York to pass further legislation enforcing the use of the Passive House model. If we as a city can lead with legislation, market the concept so that it is understood by the public and incorporate incentives such as subsidies and tax credits we will be headed in the right direction. These types of legislation will hopefully serve as a jumping-off point that will encourage the training of all involved in the building process, and the business brought to manufacturers will continue to bring the equipment necessary to the US in ways that are increasingly efficient and cost effective.

While the Passive House building model is relatively new, the legislative changes we are discussing in New York have already happened in Brussels. From 2015 and continuing forward, all new and retrofit buildings in Brussels must meet the Passive House standards. This plan was slowly phased in, incorporating training and education with industry professionals while also educating the public. By taking two small homes, one built to normal building standards and another to Passive House standards, they set the stage for a visual comparison. Each home had a block of ice identical in size, and as each tiny home stood in a public park people were able to view the ice melt through windows added to the normally constructed home in only 11 days. When the Passive home was lifted after 44 days, only half of the block melted. The micro-scale evidence for the effectiveness of Passive House is accessible for all ages, and the macro-scale evidence is just as compelling. Brussels has seen a 20% drop in their carbon emissions since 1992, all while completing many projects with zero extra cost in comparison with traditional building models.

This year’s New York Passive House Conference and Expo was a great opportunity for us to meet architects, designers, builders and manufacturers...